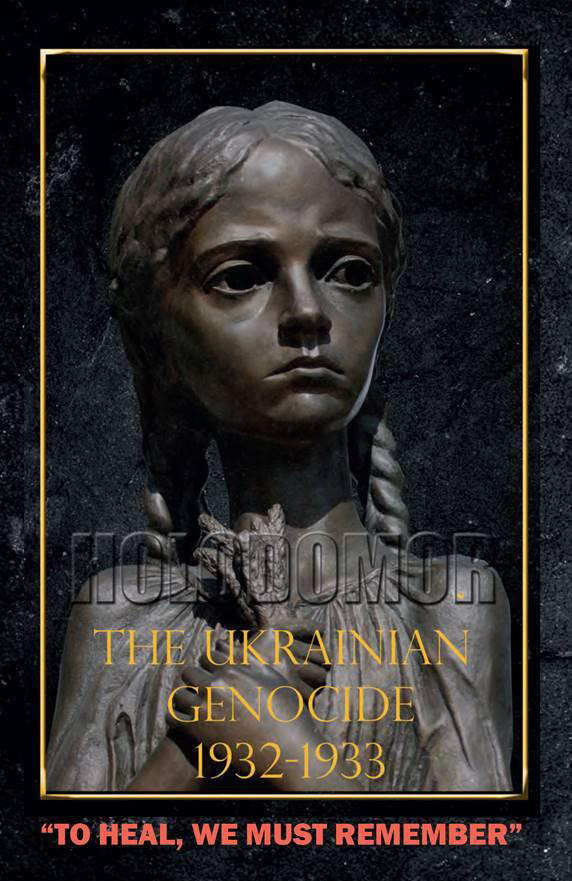 We are pleased to announce the publication of the Second Edition of HOLODOMOR: THE UKRAINIAN GENOCIDE, 1932-1933.

The Second Edition has been thoroughly updated and vastly expanded with new data, documents and analyses divided into 10 Parts, which, among others, cover such issues as historical and political contexts of the Ukrainian famine, key Soviet documentation proving the intentionality of the Holodomor, Ukrainian demographic losses and impact of the genocide, and a comprehensive bibliography on the Holodomor.

HOLODOMOR: THE UKRAINIAN GENOCIDE, 1932-1933 is a hard cover publication of 320 pp., thoroughly and pointedly illustrated, “reader-friendly”, and a strictly not-for-profit project intended for educational and informative purposes only.

For orders of 10 or more books, a discount of one-third will be provided.

All proceeds from the sale of this publication (including donations) shall support further study of the Holodomor.

The pattern of reconquest – and further expansion – of the domains of the former Tsarist Russian empire, reconstituted again as a Russia-centered empire now under the guise of the “Union of Soviet Socialist Republics”, was straightforward: destruction of the national, political and cultural elites; the national Church; wholesale executions and mass deportations of that strata of society deemed as “enemies of the people”; and, finally, the decimation of the rural population by a man-made famine in order to dismantle the intrinsic national, social, cultural and economic fabric of the nation. Alarmed by the possibility of “losing Ukraine,” Moscow also used the Holodomor as a timely weapon to suppress a widespread insurgency and farmers’ revolts – the “people’s war” of 1928-1932 – against Soviet rule.

The fact that up to 90% of deaths from starvation in Soviet Ukraine occurred over a period of only several months in 1933, indicates that Stalin’s (in his own words) “crushing blow” was delivered by Moscow precisely then. The unprecedented scope of this demographic catastrophe happening over such a short time span also unequivocally points to the intentionality and planning of this genocidal act on the part of Moscow. Hence the critically essential political dimension in the study of the Holodomor.

Mindful of the above, the material on the Holodomor presented throughout this venue has been contextualized within the established pattern of Soviet Russian empire-building and the UN Convention on the Prevention and Punishment of the Crime of Genocide (1948).

To be sure, the total demographic losses of up to 8,000,000 people during the genocidal decade of 1928-1938 include: direct losses (people who starved to death), indirect losses (lost births), losses due to wholesale arrests and executions, irreversible mass deportations from Ukraine with extreme mortality rates.

Documents attest, that the key genocidal measures (applied particularly to Ukraine and the Kuban region in the North Caucasus) were actually introduced by Vladimir Lenin in 1918-1921 – and “perfected” by Joseph Stalin in 1928-1933 – namely: 1) the destruction of the independent Ukrainian farmers as a social class and as custodians of Ukraine’s national identity; 2) resorting to deadly blockades by the Red Army of entire rural areas; and 3) the seizure by force in those areas of all grain stocks and other foodstuff from the targeted population.

Thus, in the XX century, famine conditions caused by Soviet state policies were conveniently used by the regime to subdue the Ukrainians. This weapon of famine used by Moscow has already been aptly branded as a “weapon of mass destruction in the pre-nuclear age.”

Hence, the title of this publication is Holodomor: The Ukrainian Genocide, 1932-1933, which comprehensively covers the following key aspects of this crime against humanity: Communism and the national question in Ukraine; collectivization, destruction of Ukrainian farmers and its consequences; resistance to collectivization and Soviet rule; why, how and by whom the Holodomor was organized; Holodomor losses; testimonies of eyewitnesses and survivors; cover-up and denial of the Holodomor; protests and attempts at relief; the issue of worldwide awareness of the Holodomor; Holodomor recognition and its legal assessment as a crime of genocide; the Holodomor in publications.

The study of the Holodomor in the wider context of Moscow-centered imperialism is indeed an unavoidable development as a legitimate field of scholarly research.  The legitimacy of this approach is born out by a wealth of historical documentation, which unequivocally supports the position that the collectivization along with the resulting collapse of agriculture, the physical elimination of the independent farmers as a “social class”, and the use of the ensuing famine conditions as a “weapon of mass destruction” (the Holodomor) were all triggered by Moscow’s political decisions to be implemented in Ukraine as state policy.

Just as the inherent socio-economic components of the nation’s life were marked for elimination by Moscow’s state policies, so was the cultural, religious and political strata of the Ukrainian society.  The stated aim of this two-pronged onslaught was to subdue Ukraine as an independent entity, i.e. to turn it, in Stalin’s own words, into a “fortress of socialism”.  Hence the political dimension of the Holodomor, which unmistakably points to the proverbial “smoking gun” of this genocidal crime against the Ukrainian people.

This publication evolved from the contents of the exhibit Holodomor: Genocide by Famine produced for the commemoration in 2008 of the 75th anniversary of the Holodomor.

We hope that this book will promote further awareness about a horrifying crime against humanity in the 20th century and its worldwide recognition as a crime of genocide – including by the Russian Federation as the internationally-recognized successor state of the Soviet Union.

Last but not least, in his article “The Forgotten Holocaust” (The Saturday Sun, 18 November 2000) Canadian media personality Michael Coren pointedly summarized key concerns about Holodomor recognition as a crime of genocide:

“They call it a holocaust.  And they are right.  Because a holocaust is what it was.  They also wonder why so few people share their pain and anger at what happened to their proud, beautiful nation.[…]

But the Ukrainian genocide has its deniers and revisionists.  Unlike the madmen who deny the Jewish Holocaust, however, these people are often treated with respect and authority.

Still today there are university teachers, media figures and politicians who will minimize or even dismiss the suffering of the Ukrainian people.

They argue that if the starvation did happen it was a natural occurrence. Or they somehow imply the Ukrainians brought the whole thing on themselves because of their sense of national pride, or because they stood in the way of progress. Statements and attitudes that are grotesque and horrible, but for some reason have been allowed and even encouraged.

All holocaust denial is wrong.  All denial of human cruelty is wrong. All feelings of racial superiority are wrong.  A dead baby is a dead baby. White, black, Jewish, gentile, Ukrainian, Canadian.  We now know that Soviet Communism was a hellish ideology that had as little concern for life and love as German National Socialism.

Ukrainians have known this for a very long time.  They simply want the rest of the world to know it as well.  Not a lot to ask.”

Sign Up
Donate
Copyright © 2022. All Rights Reserved by League of Ukrainian Canadians